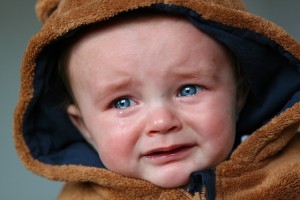 I will never forget the look on his face. The look of utter betrayal, mixed with anger and confusion. The tears squeezing out from the corners of his eyes.

I had just spanked Ethan for the first time.

He was the first child I nannied for full-time. His parents spanked, and had encouraged me follow their lead for “consistency.” He was just over a year old, and I had already been taking care of him for about half a year.

Up to that point, I had been relied primarily on redirection, distraction, and positive reinforcement as my main disciplinary tools. But that day, he just kept standing up in the grocery cart. I had already warned him that if he stood up again, he would get spanked.

So when he stood up, I calmly said, “I told you to sit down. You stood up again. Now I am going to spank you.” I wasn’t angry, I didn’t yell. I didn’t even really hurt him.

But in that instant, I broke his trust. I broke our relationship. It broke my heart.

“There must be a better way!” I said to myself.

I scooped little Ethan up in my arms, gave him a long hug, and said, “I’m sorry. I was wrong to hit you. I won’t do it again.”

I grew up in a family where spanking was the go-to tool. We were expected to obey, immediately, and without questions.

When I grew up, I didn’t question the necessity of spanking. I “knew” it was necessary to make sure kids weren’t defiant. I believed that spanking was good as long as I was clear about setting the limit, calm when I spanked, loving when I explained the reason for the spanking, and warm when I offered forgiveness.

Almost all the parents I knew at the time spanked. The ones I most admired stayed calm and loving while punishing their children. I knew one set of parents who didn’t spank, and they had whiny children who didn’t listen and weren’t fun to be around.

In my quest for something better, I drew on my training as a teacher. I wasn’t allowed to hit my students, yet I was still able to teach them, and most of the time, get them to follow the rules.

I learned to tune in to what the “misbehaviors” were telling me about kids. Were they tired, hungry, working on a new milestone? Were they bored? Was I distracted and distant when the needed my attention? And I learned that empathy and connectedness soothe a lot of everyday irritations.

There were definitely hurdles. At play group one day, Ethan hit a little girl when she grabbed the dump truck he was playing with. I bent down to his level, took his hand, and put it on the little girl’s arm. “We touch gently,” I reminded him. A few minutes later, I was in another room, and I heard one of the mom’s say loudly, “Hitting is bad. Don’t hit.”

With a sinking feeling in my stomach, I knew that Ethan had hit again. I rushed to the room, scooped him up, and took him to a quieter room. I could feel the pressure from the other women: what was I going to DO about his hitting? I broke into tears, knowing that spanking wasn’t the right answer, but that nothing I did would be right in their eyes.

Their eyes bored into me as I brought Ethan back in. They knew I hadn’t spanked him, hadn’t even reprimanded him. “I think he’s had more activity than he can handle today. We’re going home.” The other women, thankfully, were gracious. While they probably disagreed with how I handled the situation, they didn’t let it interfere with our friendship.

And then I met the Blacks. They were unlike any other family I knew. Their two kids,  6 years old Jacob and 3 weeks old Alena, were not on any type of schedule, though Jacob took martial arts and music lessons. He also called his parents by their first name.

We clicked right away.

I started watching baby Alena a few times a week. Ethan loved to poke or pinch her.

Most of the time I was able to catch him before he actually hurt her. I would say in a playful voice, “Where are those gentle hands of yours?” then proceed to look for them behind the sofa, under a chair. When I’d “find” them, I’d shower them with kisses. He’d always erupt into fits of laughter.

When I wasn’t fast enough to prevent a hit or pinch, I’d comfort Alena while reminding Ethan to touch gently while helping him gently stroke her face or tummy, as well as on his own body so he’d feel the gentleness.

One day, Ethan hit or pinched Alena three times in about 20 minutes. It had been a while since he’d done it, so it took me by surprise.

With tears in my eyes, I told Alena’s dad what had happened, and my frustration and my doubts about how I was handling it. “You are modeling gentleness and empathy. He’ll learn.”

And he did. He learned how to share and take turns and ask for help when a situation was too much for him to handle.

And I learned to use my bigger size, my greater intelligence, and his dependence on me not to control him, but to connect with him.

The look of betrayal was replaced with one of trust and joy. He was safe. He was accepted. He was loved.

When was a time you changeg course as a parent? What challenges did you face? What were the major “wins” of the change? Tell me in the comments… I read every one!