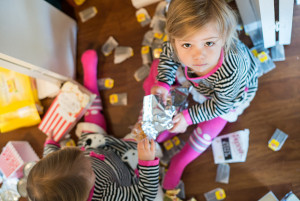 “I see empty boxes and two little girls sitting in a pile of game pieces.” Photo by Donnie Ray Jones. CC BY 2.0

Nine magic words. That’s all it took to transform bickering brothers about-to-brawl into best-of-friend playmates. No finger-pointing from them. No yelling or threats from me. No arguing from any of us.

Just a moment of golden silence before the older said, “Wanna play ninjas when we get home?”

It all started with the after school pickup. (I don’t know about you, but that time of the day seems to bring out the worst in everyone.)

Brother #1: Look at the pumpkin mask I made at school.

Brother #2: Oh that’s what that is. I thought it was some sort of weird hat.

#1: *sticks tongue out* You’re so mean. When we get home, I’m going to play Minecraft, and you can’t play with me.

I waited a few minutes to see if they could pull it together, but the conversation was going downhill fast. Both boys were getting angry, and the names were starting to fly. “Stupid.” “Butthead.” “Crybaby.”

How could I intervene without taking sides? How could I create space for them to solve their own problem?

“I hear a lot of unkind words back there.”

Not the reaction I expected. I was ready for an argument, for justifications, but not for what I heard next.

“Hey, wanna play ninjas when we get home?” asked the older boy. The younger one enthusiastically accepted the invitation, and they started planning their adventure.

Putting “Say What You See” Into Practice

Cleaning up: You are frustrated because your kid is taking FOREVER to pick up the play area.  You can say, “I see you put away the books and some of the blocks. The rest of the blocks and the dolls are still on the floor.”

Getting out the door: “We have 5 minutes left before we leave. I see need your hat, backpack, and lunchbox before you are ready.”

Fighting over a toy: “I see two kids who both want to play with the firetruck.”

Grades: “I see you have missed two homework assignments.” (This only works if you keep the tone mellow. Otherwise, it’s just a disguised criticism.)

A kitchen catastrophe: “I see piles of sugar and flour and cocoa and raisins and something sticky.” (Which got the reply, “I’m making you a cake for your birthday.” While I still wasn’t happy with the mess, the loving intent and the huge smile greatly soothed my frustration.)

And even when things are going right: In the game today, I saw you kept your eyes on the ball and you stayed in the ready position while you waited for the ball to come over the net.

So avoid finger-pointing, yelling, threats, and arguing. The next time you need to work some magic with your kids try out Say What You See. Tell us in the comments how it worked for you.