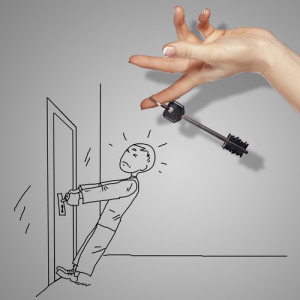 A child seldom needs a good talking to as a good listening to. -Robert Brault

Would you ever slam the door in your hosts’ faces when they’ve invited you to dinner in their home?

Of course not! That’s just rude. They’d hesitate before inviting you back, and they might even start to question their friendship with you.

I encountered an emotional door-slamming earlier this week. I told my husband that I wanted to reschedule a trip. He has a project he’s been wanting to do that requires me and SweetPea to be away from home. Originally I picked a weekend off the top of my head, about two weeks away. As I started looking at what I wanted to do, I felt increasingly stressed because I couldn’t find anything that felt worth the expense and effort of planning a solo trip with a toddler.

When I told my husband, he quickly came up with a list of great ideas and also told me not to worry about the expense. For him, the expense was well worth the opportunity to get the project done.

Unfortunately, I left the conversation feeling deflated. I knew he was trying to help, and his suggestions really were great. But I didn’t feel like he really understood me.  He wasn’t really listening.

We do the same thing to our kids all the time. When they talk about a problem they are facing, it’s a special invitation to see their emotions, fears, and thoughts.  We all want our kids to be able to trust us with their problems, to know that we are on their side.

But without realizing it, we can quickly close-down their willingness to talk to us.

Without meaning to, we send the message that we don’t take them seriously, don’t understand them, don’t value their thoughts, or don’t think they are capable of solving their own problems.  Not a great way to build a relationship!

Don’t believe me? Let’s do a little exercise. Below are three common parenting challenges. Read each one, then write down exactly what you’d say to your kid. (Keep it real…don’t write what you think you SHOULD say.)

How many of the following “door slammers” did you use? (Some of your responses may actually contain more than one!)

Reversing the usual “mountain out of molehills,” you try to make the problem or emotion feel smaller.

“We all go through that. You’ll feel better tomorrow.” “Take it easy. It’s not that big of a deal.” “I wouldn’t worry about it too much. He’ll be fine.”

Using your kid’s statement to launch into talking about your own problems, past or present.

“I hated my first grade teacher too. She was so mean!” “When I told my sister to shut up, my mom…” “My friend Paul did the same thing when we were kids. I handled it by….”

Issuing a direct order, telling your kid how to behave or what to do. You expect to be obeyed quickly.

“Stop complaining.” “I don’t ever want to hear you say such things again.” “Give me his phone number. I’m calling his parents right now.”

You try to motivate better behavior through punishment/consequences.

“If you’re going to be disrespectful, you’ll just have to sit in your room when we get home.” “If you don’t settle down, there’ll be no TV tonight.” “If he’s going to make bad choices like that, then you can’t go over to his house anymore.”

Making something a moral imperative, telling kids what they should or shouldn’t do.

“You should respect your teacher.” “It’s not nice to say ‘shut up.’ ” “You shouldn’t hang out with him because you’ll only end up getting drawn-in to his negative behavior.”

You attempt to fix the problem or offer the answer.

“You need to get through the year, so you should just focus on what is good about her.” “Put your hands over your ears so you can’t hear the baby.” “Can’t you talk to her parents?”

Trying to convince someone with facts or logic

“Ms. Block is such a nice teacher. Remember the note she sent at the beginning of the year?” “The baby is crying because she’s tired right now. You used to do the same thing.”  “Teens who drink are more likely to get into car accidents, do poorly in school, and often get into drugs.”

You criticize or negatively label your child.

“Do you always have to complain about something?” “I don’t need to listen to two screaming babies!” “Why can’t you ever pick decent friends?”

Trying to make your child feel better about himself/herself, or using a backhanded compliment to try to encourage “good” behavior.

Trying to point out why your kid is wrong or how they are handling the situation in the wrong way.

“You don’t really mean that. She’s such a nice person.” “That’s not how big boys act.” “Why didn’t you tell him he needs to cut it out?”

Diagnosing why your child is acting a certain way.

“You’re just mad because you got a bad grade on your spelling test.” “You’re just sleepy right now.” “You didn’t speak up because looking cool is more important to you than doing what’s right.”

Automatically agreeing, commiserating with or consoling your child.

“She’s a really mean teacher. I don’t know why the school keeps her on.” “It’s ok. He’ll stop yelling soon.” “I can’t believe he’d put you in such a position by telling you that. What’s he expect you to do?”

Trying to get more information so you can solve the problem.

“What did the teacher say?” “Why would you say that?” “How long has he been drinking?”

Turning the child’s attention to something more pleasant.

“Cheer up, we’re on our way to Julie’s house.” “Want to play a game on my phone?” “Have you decided who you’re going to ask to Prom?”

(Note: I’m not saying we shouldn’t ever offer advice, solutions, and facts.  Part of being a parent, after all, is teaching our kids. But kids can only hear our message after they feel like they have been listened to and understood.)

In Part 2, I’ll introduce you to the antidote to door-slammers and tell you how I found a solution to my weekend dilemma.

Your turn:  Which of the door-slammers do you use most? (Mine are The Solution, The Facts, and The Pity Party.) Can you “rewrite” your response to one of the situations above using door-openers instead?  Tell us in the comments below.